Back to School Survey Costs More than one-third (36%) of parents in Ireland say they are getting into debt due to back-to-school costs.

This is an increase on the 29% of parents in the same situation last year, according to figures released by the Irish League of Credit Unions (ILCU) today.

Some 67% of parents surveyed in the national study said back-to-school costs are a financial burden. Almost half (46%) said that costs are their biggest back-to-school worry, well ahead of concerns that children won’t settle in or make friends (15%). The number of parents saying they will be forced to deny their children certain school items has also increased – rising from 25% in 2017 to 31% this year. Of this group, four in 10 said they cannot afford new school shoes for their children, while seven in 10 said extracurricular activities will be cut from the budget.

Cutting back on food and bills

The study found, however, that overall costs have fallen somewhat since last year. Parents said they are spending €999 per primary school child, a €49 decrease on 2017.

For secondary school children, parents said the cost per child has fallen by €22 to €1,379. In general, the decrease was mainly due to a falls in the prices for extracurricular activities, transport and after-school care.

According to parents, the biggest spend for primary school children is again extra-curricular activities at €153 per child, followed by school lunches at €142 and after-school care at €140.

In relation to secondary school students, parents said the most expensive item is again books at €200, followed by uniforms at €179 and school lunches and transport – both costing €175 each.

The ILCU said it’s concerning that of those parents in debt, more than a quarter (27%) said they have turned to a moneylender in an effort to cope with back-to-school costs. This is up from 20% last year.

When asked why their preferred option was a moneylender, 46% of this group said they felt they would be guaranteed the money and that the approval processes in banks and credit unions would be more difficult. 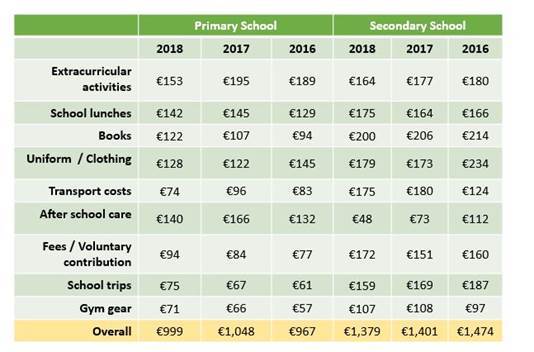 Four in 10 parents (42%) said they felt they had no other option because they had a bad credit history. A significant number of people in this group (77%) said they will use a moneylender again this year to cover the back-to-school spend.

Almost seven in 10 parents (69%) said that schools are not doing enough to keep costs down, a decrease from 76% of parents last year. When asked how schools could do more to help in this regard, 32% said reducing the price of books or introducing a book rental scheme, and 22% said the option of generic uniforms or even free uniforms would help.

Commenting on the findings of the survey, Paul Bailey, ILCU Head of Marketing and Communications, said: “Despite the current recovery of our economy, families continue to struggle to cope with the cost of sending their children to school.”

Bailey said it’s “somewhat encouraging” parents are reporting that certain costs have reduced since last year, but at the same time there are “increasing numbers of parents saying they are in debt, and a rise in the numbers saying they are turning to moneylenders”.

He encouraged people to visit their local credit union to discuss their options “even where they feel they have a poor credit history”, rather than turn to a moneylender,

Bailey said moneylenders sometimes charge an annual percentage rate (APR) as high as 188%, based on figures compiled but the Central Bank. He said using them can “lead to a recurring cycle of unnecessary debt and irrational borrowing”.